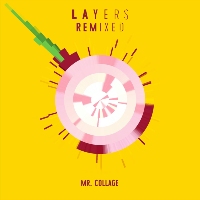 If you were paying attention to music back in March you might have caught Mr Collage’s debut LP, Layers, which displayed no mean production talent in the field of hip-hop and breakbeat music. Mind you, given that it was March you might well have been paying more attention to the still emerging pandemic which meant poor old Mr Collage (like everyone else) was forced to play second fiddle to a virus. Now that things have calmed down a little, label Mind The Wax are keen for such talent not to be overlooked and what better way to draw attention to the original album than to put out a remix LP? Compare and contrast? Don’t mind if I do!

Like the original, Layers Remixed takes in hip-hop, dancefloor-geared uptempo breaks and downtempo cinematic grooves, though some remixers head in a slightly housier direction – Stiko’s take on Landing for example. The track order also remains the same as the original and it’s Mr Collage’s best cuts from Layers, too, that result in the best remixes.  Groove Sparkz’ remix of instro. Frusciante is, therefore, an equally dope opener – but that Chili Peppers-esque guitar now floats over a skanking uptempo riddim rather than languid, dusty breaks.  Groove Sparkz is also in charge of what was the original LP’s closer – the dreamy breakbeat ambience of For Sale which under his influence now becomes a haunting trip-hop groove.  Also of note is DJ Mr K’s crack at the Lady EMZ-featuring Cat In A Box – originally a brisk and apparently northern soul-inspired soul groove but now a somewhat slower and more minimal breakbeat number.  And like the original again, it’s the hip-hop cuts that are best of all.  Under the direction of label-mate Bouklas, the boom-clap of the Nico The Beast & DJ Mysterons vehicle Funky As Me is replaced by heavyweight boom-bap, the dusty drum breaks of Thrilled are rebooted with synth boom-bap drums and, best of all the remixes, Grzly Adams replaces the rolling drums of Status Quote with a super funky break and piano motif. There’s also time for a bonus track by Mr Collage himself – another hip-hop cut featuring MC Yinka for whom our man drops a swirling slab of sci-fi boom-bap just to show y’all who’s boss. Perhaps the only downer is that, sadly – for now at least – this is a digital-only release.
(Out now on Mind The Wax Records)