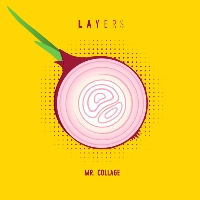 Mr Collage? Layers? Could we be in the presence of a beat-making sample-junkie? I think we could! Say hello to the little-known (but on the evidence of this soon to be much more widely-known) Greek producer whose long-player debut takes in breakbeat music of multiple shades – boom-bap hip-hop, dancefloor-geared uptempo breaks and downtempo cinematic stuff. Eleven tracks deep, Layers contains seven vocal cuts featuring artists from across Europe and the U.S. while all the beats were crafted from a mixture of samples and additional original instrumentation.

There are no prizes for guessing that chilled opener Frusciante is a tribute to on-off Red Hot Chili Peppers Guitarist John Frusciante, opening as it does with a vocal sample from the guitarist himself and turning on a funky drum break featuring a electric guitar solo motif. Track two, Funky As Me, flips the script immediately, providing mid-tempo hip-hop thrills driven by a squelchy clav. as Nico The Beats gets on the mic and DJ Mysterons also climbs aboard. Keeping things hip-hop is Status Quote (a tongue-in-cheek name if ever there was one) a rolling funky break featuring DJ Hypercutz and bars from S Squair Blaq. Upping the tempo slightly is Cruisin’ Through The City on which rapper 1989TRE and singer Lisa Spykers provide both sides of a tale of mutual attraction. The languid Blue Gardenia delivers classic trip-hop thrills and sports a Dinah Washington vocal sample and is followed by another downtempo cut – On Fire which features Amira Lacrima and travels a Morcheeba-ish path. The moody minor key Instant (feat. Mantique) picks up the pace again which is maintained by the similarly brisk and northern soul-inspired Cat With A Box (feat. Lady EMZ). The album’s final trio of tracks consist of two instrumentals (the reflective but relatively brisk SKG Landing and the dreamy closer For Sale) and a further slice of hip-hop featuring Mic Bles on the mic and DJ Moya (always a mark of quality) on the cut. All in all, a kaleidoscopic array of beats – well is he named Mr Collage!
(Out now on Mind The Wax)