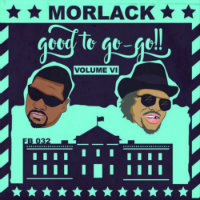 Ok so here’s your latest lesson in DC go-go from Morlack – surely the music’s biggest fan (not to mention biggest proponent of it) outside Washington DC itself – with another massive payload of 80s-influenced beats. Imagine an A Skillz entirely fixated on the music brought to the world by the likes of Chuck Brown and later Experience Unlimited and Trouble Funk and you’re more or less ball park for Morlack’s sound and aim as he raids his colossal go-go collection for cuts to edit. Cue re-versions with massive bottom end and percussive heft teamed with suitable acapellas. On this release EU is paired with The Herbaliser on Family Anime and Trouble Funk with Ray Charles on Get Down. From the lesser-known end of the go-go spectrum come Redds & The Boys who provide the basis for Movin Alright (which features a JT Money ‘pella) and Crazy Wig on which Slug-Go are teamed with dancehall don General Levy and 80s funk giants Prince and Nona Gaye. And that just leaves Ramify/ Whodini collision U R The Rap Machine which runs Get Down close for best track. More slap bass and synth drums than you can shake a conga at in other words.
(Out 15 March on Funk Blasters)