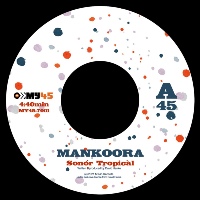 Renegades Of Jazz returns to his experiments in tropical sounds under his Mankoora alter-ego after a short break of – oohh – only nine years or so with new vinyl 7″, Sonór Tropical. On the A-side, the title track is an understated piano-led Latin-jazz breakbeat shaker served with a side of violin and a deceptively chunky bassline.  In fact, it’s exactly like a Latin version of those early Renegades Of Jazz releases on Wass Records as the monkey noted, many moons ago on the first Mankoora 45. Flip it over and this time things arguably display a bit more of an African influence with the guitar and vocals giving this upbeat groove a highlife-ish air.
(Out 16 April HERE)