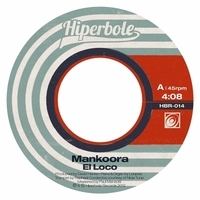 Mankoora? The new Lamborghini super car? A Congolese psych-funk supergroup from the 70s? An exclusive members-only sex club in Berlin? Nope – none of the above – though debut single El Loco/ Boogaloo Tormenta is a bit exotic. Yep, it’s all uptempo b-boy breaks and South American musical stylings – kind of like Renegades Of Jazz on a latin jazz tip. But then maybe that’s because this is Renegades Of Jazz on a latin-jazz tip. Along with his buddies Loopez and Alexander ‘Newton’ Bednasch on keys and guitars respectively. Hip-shaking? Tu sabes.
(Out 24 September on Hiperbole Records)