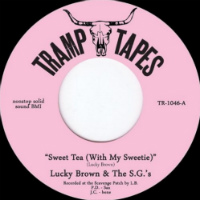 On the PR blah, it says that Lucky Brown & The SG’s Sweet Tea (With My Sweetie) is the only ‘lost track’ from the sessions that produced last LP Mesquite Suite and damn if you won’t be glad they ‘found’ it again. Given the fact that the album took an afro-funky and film-score jazzy direction, you can see why a fat spit-and-sawdust, shuffling Texas-funk nugget like Sweet Tea might not have fitted in but to leave such an irresistible call to the dancefloor unreleased would be criminal. So they haven’t and it’s out on 45 this week. Add in the time-honoured Part 2 – a.k.a. More Sweet Tea – on the flip and you’ve got yourself practically eight minutes of smoking guitar n trombone-led instrumental stankiness.
(Out 1 March on Tramp Tapes)

Posted on 28th February 2019 no comments