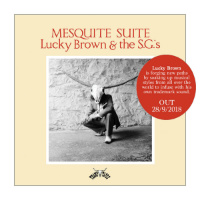 Mesquite Suite? ‘Mesquite Schweet’ more like as Tramp Record’s latter-day funky heroes Lucky Brown & The S.G.s return with their latest full-length offering. Brown has been a Tramp regular since 2011 when his Lucky Brown’s Space Dream solo album appeared offering earthy blues and swamp funk, an effort followed by more of the same on 2015’s Mystery Road. The script has been flipped a bit for Mesquite Suite however with both jazzy and afro-funky elements creeping into the mix and an altogether more sophisticated, sound-track type feel.

Opener Lone Heart is a case in point, opening with an atmospheric Crosswinds-era Cobham-esque drum fade-in building to loping film score jazz-funk before things suddenly change-up (even before the halfway mark) to go double-time on the tempo and throw in a sax solo. This is followed by the title track which announces itself with a big horns vamp and subsequently delivers a groove that speaks of border cantinas in one-mule towns and is a shoe-in for the soundtrack of the next Coen Brothers’ western. The afro-vibe comes through strong on a number of cuts particularly the strongly psychedelic Mother Corn Stalk and the dusty, windblown Justice – a pair which form a centrepiece of sorts to the album. Also of particular note are Saints And Beggars with its New Orleans parade vibe, the late night soul ambience of Glancing Meteors and another shoe-in for a film sync – the Latin-infused shimmy of Estrellas De La Tierra. Definitely one to file alongside Menahan Street Band and El Michels Affair. Album teaser below.
(Out 28 September on Tramp Records)

Posted on 11th September 2018 no comments