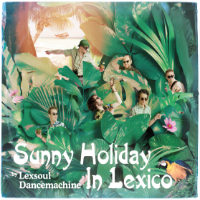 If you caught Lexsoul Dancemachine’s blistering debut LP Deus Lex Machina last year and/or caught one of their electric live shows, you’ll definitely be stoked to hear that album number two, Sunny Holiday In Lexico, has arrived and right to expect even more heavy funk bombardment. But don’t expect Deus Lex Machina part 2. For if the Estonian crew’s funk took cues from sixties mod and garage rock sounds for much of that album, this time around it’s all about the funk and disco conjunction occupied in former times by Con Funk Shun. Add to that some smouldering Isaac Hayes-style ‘over-the-music’ mumbling, a dash of Rare Earth and Wild Cherry-type guitar licks and an island vibe funkier than the soles of Ray Munnings’ flip-flops and that’s the deal right there.

Opener Lexico firmly establishes the album’s tropical funk credentials with organs and drums emerging from ambient sounds of jungle and airport. Like a hula girl bearing armfuls of leis its jaunty syncopated shimmy serves to pleasantly warm you up for the more full-on experience that awaits you further on and further in. Feriado Tropical announces it’s arrival with a massive bass-popping groove and a more – well – tropical take on those Hayes-patented bass mumbles. Domingo is shiny four-to-the-floor business and a surefire lady-pleaser, while Coconuts was the first single that managed to find the nexus of latin funk, acid jazz and –
er – nu-metal band Incubus’s track Summer Romance. Don’t expect any flagging in the second half of the album either where you’ll find Jewels Wrapped In Paper (which mixes up tropical-flavoured Chic-isms with rapped Sugarhill vibes on the outro), the hypnotically-pumping 142 bpm Tsunami and more Hayes-meets-Con Funk Shun on closer Trans-Lexico Express. It might be winter right now, but this should put some sunshine in your life.
(Out now on Funk Embassy Records)

Posted on 20th December 2017 no comments