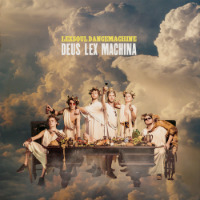 You hear things in the unlikeliest of places. Or rather (in the case of Lexsoul Dancemachine‘s debut LP Deus Lex Machina) you hear things from the unlikeliest of places. Mind you it is 2016 and what with the interweb and all, no one should really be surprised that an amazingly raw broadside of contemporary funk should come barrelling out of Estonia. Billing themselves as a “raw smoking hot funk beast” – it’s one of those rare occasions when the hyperbole turns out – er – not to be hyperbole. For a ballpark idea of the band’s sound, imagine if you will the garage-rock inflected funky soul of Melbourne’s excellent Deep Street Soul married to sixties mod rock vocals and you’ll more or less have it. The biggest surprise might be that while this actually came out last year in Estonia and made a big local splash, the ripples have yet to spread. It’s time that changed.

Although mainly sixties influenced it is true that in the latter half of the album you also get the smoother pleasantness of In Your Arms (pitched somewhere between seventies soul, acid jazz and an indie rock groover – complete with a ‘yacht rock’ guitar solo!) along with late seventies whiteboy soul on Goodbye and a very seventies-ish fusion style bit of guitar on closer Get Up Move On. Still you’ve got to vary it up a bit and like I said, this is mostly filthy raw. Stank highlights include the super catchy Tell Me, Tell Me, the blistering Too Hot, searing bass and organ-driven chugger Anybody’s Business and another monster in the form of squelchy seventies bump Beef Grinder – though in truth you’d be hard put to find something you didn’t like. Production is excellent and this release is characterised by a potent energy – obvious from live performance – as you’ll see from the video below. In short there’s no posturing here, they wanna get into it man, you know – like a…well…like a sex machine. JB would be proud.
(Out now on Ehtertainment – HERE or HERE)