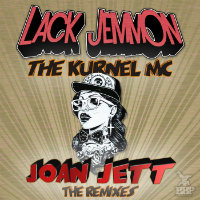 Having managed, arguably, to score the best track on Breakbeat Paradise’s recent Bring Back The Funk comp. with their earworm cut Joan Jett featuring Kurnel MC, Hungarian duo now bring back Joan Jett for the remixes. Of which there are six – which means the remix package of just this one track is the same length as – why – the entire EP on which the original appeared! But who got their hands on the stems? Step forward: Liberty Chaps with their wobbly version, Bezwun with a slightly squelchier wobble version, Mr Bristow with his minimal 80s computer game wobble version, Mined & Forrest with their fuzzy wobble version (complete with added Cypress Hill), Basschimp with his pumping uptempo bass fuzz version, and Funkanizer with their disco wobble version. Which is a lot of Joan Jett and a lot of wobble, all things considered. Almost enough to make you get a feather cut, frankly. Though she did shave her head once. Joan Jett, that is.
(Out now Juno exclusive/ 26 January globally on Breakbeat Paradise)