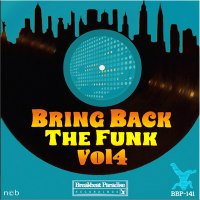 Who’d have thunk it? It’s been two and a half years since the last volume of a certain BBP comp. so it’s long past time that Breakbeat Paradise dropped Bring Back The Funk Vol. 4 which is a bumper six cuts long. Longtime cohorts Badboe & Prosper stand up first with a Ludacris ‘pella and a James Taylor sample over a suitably beefy disco breaks beat to ensure your smiling face. There’s also B-Side who provides a surprisingly restrained slice of distinctly unwobbly instrumental G-funk in the form of the 2017 mix of Cali, Kibosh who puts that Ghetto Funk sample pack to good use over the mildly wobbly Blowin’ That Sound and Synoptix who shamelessly lets the dogs out on the massively wobbly Police In A H@rd P#rn. Which means it’s left to Lack Jemmon and duo Hebegebe and Brian Carson to duke it out for best track. The former’s, entitled Joan Jett, is a suitably guitar-heavy peak-time banger featuring vox from Kurnel while the latter’s – Grand Skunk – pits vintage organ sounds against DJ Kool and classic heavily syncopated funky drums. Lack Jemmon might just have the edge, not least of the reasons for which is the earworm original vox (rapped and sung) from Kurnel.
(Out 3 Nov. (Juno exclusive)/ 11 Nov. on BBP)

Posted on 8th November 2017 no comments