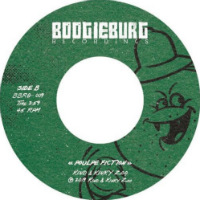 Swiss outfit Kind & Kinky Zoo return with a new vinyl 7″ packed full of nutty goodness and juicy instrumental antics in the form of Seven Noisettes b/w Poulpe Fiction. If you caught 2017’s long-awaited LP Released! you’ll know that while this lot are on the funky spectrum, they feel entirely unconstrained by genre boundaries and at any given moment are liable to veer off at jazz or psych tangent. This release is no exception with the band, if anything, pushing the sound envelope even further. Seven Noisettes kicks off with fuzz rock chords that are soon joined by psychedelic flutework and eventually a funky drum break – oh – and some vintage organ too. Poulpe Fiction meanwhile commences with some vintage synthesizing, before launching into a briskly paced-beat that borders on new wave or even post-punk. It’s all saying ‘arty European vintage soundtrack’ to me and almost certainly will to you too. File somewhere between the output of the Delights Records label and the more out-there material from Calibro 35.
(Out now 24 May on Boogieburg Recordings)