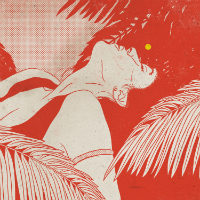 Who would have thought in the same month that the band with the best name in contemporary funk release an album, the band with the weirdest name in contemporary funk would release an album too? Or that they would both be good. The latter are none other than Switzerland’s Kind & Kinky Zoo and sticking with the weird naming thing, they’ve decided to release an album entitled Released!. Of course they have! And they’re probably right to make a big deal of getting it out too since they formed a full twelve years ago and have managed to average an output of one single – oohh, every two years – all of which appear on this set. Still you can’t hurry craftsmanship and KKZ craft what the monkey once described as, “crazy-ass, fuzz-heavy, flute-funk antics,” with the best of them.

Another particularly apt description of the band was presciently written by one Q-Tip several decades ago when he invited listeners to,“Rock and roll to the beat of the funk fuzz/ Wipe your feet really good on the rhythm rug” – almost as if he got in his time machine and saw them play live. Mind you, hearing them on record is often tantamount to hearing Kind & Kinky Zoo live anyway since they manage to pull off sounding like a jam band without sounding wack – no mean feat. Check the final minutes of Big Bite or Party Chez Le Marquis for the best examples of this. If you’re familiar with the singles, you’ll already have caught the upbeat psych-funk of La Jupe Volante and Wonder Zebra along with Hurricane Train – here in its rolling ambient jazz-funk Soul Brigada remix incarnation and the other remix present – Lack Of Afro’s super phonky heavy groove version of V.L.A.M. in all its blaxploitation-esque glory. Admittedly that’s quite a lot of already released cuts. So what remains? Well – the scorching aforementioned Big Bite, the positively flute-loopy Bestial Zoo and the best two cuts on the album. One of these is fiery closer Jump The Gun – the only vocal track on the album which features Brooklyn mic legend Afu-Ra astride furious funk beats and the other is the enigmatically-titled Beat Sample which is best described as heavy funk as produced by ancient eastern Mediterranean civilisations. Well, that and dope. Released!? Scored!
(Out 27 October on Legere Recordings)