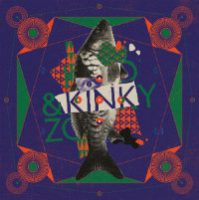 Another single from Kind & Kinky Zoo so soon after the last one? Does anyone else sense an album in the offing? This time it’s Sakura Chan b/w Seabass. The tonally lighter former floats (or more accurately flauts) off through funky psychedelic late sixties pastures characterised by Rhodes piano and gnarly vintage keyboard sounds, dry funky drums, a middle eight vocal refrain and, of course, some dope flute-playing. Equally psych-funky, Seabass is also immediately darker, opening on a heavy fuzz tip and proceeding to chug along like the fine catch that it is. Ironically for a Swiss band, this single has already seen a Stateside release on FNR back in April whereas this is the European release, out on digital as well as 45 complete with ltd. artwork. And while that might be your second chance to get a copy, it won’t hang around.
(Out late June HERE)