KENO: Around The Corner 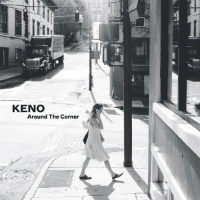 The new year is finally upon us but what lies around the corner from producer David Hanke? Appropriately enough, it’s a new sample-based cinematic downtempo LP entitled Around The Corner under the nom-de-plume Keno. Which means that ‘the producer with a thousand names’ (well, alright five at least) has added yet another moniker to a growing list that already includes Renegades Of Jazz, Dem Juju Poets, Mankoora, and either Mash or Munkee (I forget which) of Mash & Munkee – not to mention dropping yet another finely crafted piece of audio excellence.

Like mid-nineties trip-hop of the Mo Wax variety and early noughties downtempo on the TM Juke/ Blockhead/ The Q4 axis, Around The Corner sonically draws influences from both 70s jazz and soul. This is made evident from the off as the double bass, strings, Rhodes and laid-back drum break sounds on the opener (and title track) and the double bass, strings, laid-back drums and piano tinkles of next cut Merrythought can testify. The third track, Elwood, an LP highlight, features a more complex rolling drum pattern but has a harp melody loop that’s close enough to a guzheng sound to lend the track a martial-arts movie feel. The drums on Spines & Rays venture into afro-beat territory and more harp loops turn up on the Kruder & Dorfmeister-esque Flingair. All Else By Far provides a soulful warmth that will appeal to fans of Apollo Brown and another highlight is Where The River’s High which builds from a double bass loop, gathering piano and a sleigh-bell-toting break that evokes long journeys across shadowy wildernesses. It’s no hardship to listen to this though for Around The Corner is an audio voyage you’ll be happy to make.
(Out 27 January on Agogo Records)

Posted on 6th January 2018 no comments