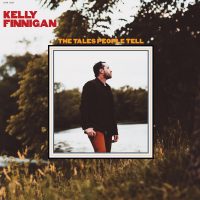 If there’s one tale people will tell about 2019, it’s that it was an epic year for classic soul albums. Eli Paperboy Reed’s 99 Cent Dreams, Lee Fields’ It Rains Love and Bobby Oroza’s This Love are already out while Tanika Charles’ The Gumption is imminent and here’s another to add to that select list – the debut solo album from Monophonics singer Kelly Finnigan entitled – er – The Tales People Tell. If you know the Monophonics’ work, you’ll know they know their onions when it comes to funk and soul showing equal proficiency with torch songs as psych-funk bangers and as liable to put a new twist on an old classic as – well – drop a new classic. Not for nothing did Stax Records Al Bell describe them as one of the best soul bands he’d ever seen and so it comes as little surprise that the band’s lead singer should deliver a highly accomplished solo set.

In the event, it turns out Finnigan wrote and produced every track on The Tales People Tell not to mention played ten instruments throughout. He also wasn’t averse to calling on the great and good of the contemporary soul community to help fill any gaps either and the LP sees instrumental and vocal contributions from pretty much anyone who is anyone Stateside – Monophonics, Dap-Kings, Antibalas, Orgone, Jungle Fire, Lady Wray and Lee Fields to name but a few of the contributors. Talking of Lee Fields, proceedings commence with I Don’t Wanna Wait which finds our man convincingly enter that lady-pleasing Fields/ Charles Bradley soul territory with a lightly chugging soul number punctuated by big horns vamps. This sets the tone for most of the album really – in other words expect less of the funk present in Monophonics material and more of that Lee Fields/ Charles Bradley soul with arrangements that occasionally tend towards the symphonic – witness the orchestral backing voices on the multi-layered I’ll Never Love Again. Elsewhere, Catch Me I’m Falling provides a slice of that flavour of the month lowrider soul sound while things get funky on Since I Don’t Have You Anymore (which turns on a nifty little drum break) and the LP’s fastest cut – an uptempo Stax-ish floor-filler called I Called You Back Baby. These two cuts are also represent the two extremes of Finnigan’s voice which seems as happy providing an almost helium-induced falsetto on the former as it does a raucous tenor growl on the latter and a promising sign (along with our man’s song-writing and instrument playing abilities) that the future of proper soul music is in safe hands.
(Out now on Colemine Records)