BOBBY OROZA: This Love (album) + Your Love Is Too Cold video 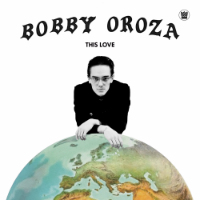 Vying for the title of king of the new wave of lowrider soul must surely be Bobby Oroza with his debut album This Love. The LP is the culmination of a journey that began three years ago with the original release of the title track – a slice of summery Latin soul haze – on Timmion Records. Last year the single was re-released on New York’s Big Crown label and there was talk of a long-player in the offing. Despite this, there was pretty much a deafening silence from the Oroza camp – apart from the regular ‘kerching’ of a till as the seven inch continued to shift so many copies that units sold are now over the three thousand mark. Then second single Your Love Is Too Cold appeared in February – flipping the script and the tempo with a track that betrayed northern, surf and psychedelic influences while retaining Oroza’s trademark vocals and all of sudden the album was imminent, its sound very much presaged by the two singles.

It’s a sound that owes much also to the skills of Timmion Records’ production crew and house band Cold Diamond & Mink who also provided music for other big recent lowrider soul hits for Pratt & Moody and Gerald McCauley. For while (as his name implies) he has Latin heritage, Oroza was in fact born in Finland, and with his musical inclinations, it was surely only a matter of time before his path crossed that of the Timmion crew. On the LP, that Oroza/ Timmion partnership teams a voice employed equally capably in both tenor and falsetto with dreamy beats kindred to that of This Love occasionally leavened by something a little more for the dancefloor à la Your Love Is Too Cold. Of the former, two of the most distinctive are lilting opener Maybe, Maybe, Maybe – less a track than a musical zephyr which positively requires being listened to whilst parked at the beach late on a hot afternoon – and the woozy delights of Down on My Knees. Of the more dancefloor cuts, Falling In Love is the most northern soul-like, while Lonely Girl and Keep On Believing employ the funkiest rhythms on the album without losing that Cholo-stereo appeal. All of which means that This Love has more than enough love for both the lowrider community and beyond to get with – whether grooving or smooching.

Don’t forget to check out the David Lynch-like video for Your Love Is Too Cold below on which we all learn something about the perils of drinking vodka alone in a Finnish bar.
(Out now on Big Crown Records)