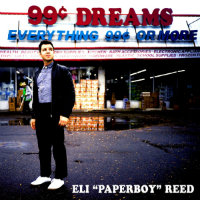 It might be called 99 Cent Dreams but don’t let the self-deprecating title fool you – the latest LP from Eli ‘PaperBoy’ Reed is 24 carat quality and further confirmation (were it needed after the cathartic post-major label gospel fire of 2016’s My Way Home) that Warners didn’t so much shoot themselves in the foot when they let him go as much as shoot both feet right off. This latest effort, Reed’s sixth studio LP, was cut at the post-Sun Records Memphis studio of production legend Sam Phillips – fittingly for such an unabashed champion of the southern soul sound as Reed – and features him fully re-vitalised, maturer (he’s now a father of two years) and confidently marking his entry into the second decade of a musical career channeling the likes of Jackie Wilson and Sam Cooke with un-dented enthusiasm.

You’ll have a good idea of what sort of thing to expect from this album if you’ve already heard flirtatious single, Bank Robber, with its piano and organ-drenched sixties-style rnb groove punctuated by horn stabs and the LP’s most irresistible hook. Of similar stylistic ilk is the rousing Lover’s Compensation with Reed demanding payback from an ungrateful ex and the livelier again (not to mention funkier) guitar-led Tryin’ on which the horns, when they appear, go even larger and Reed really pushes the boat out vocally. Elsewhere a lighter touch is employed like on Said She Would which joins the dots between soul and doo-wop and the wistful Coulda Had This which shows Warner – er – I mean an ex – what could have been. Obviously you don’t listen to Reed for a contemporary sound but like others working in the same genre (Lee Fields for example) he does occasionally tweak the formula and nod to a hip-hop sensibillity, so while there are plenty of retro touches to Burn Me Up it also chugs along on a crisp drum break and employs a more modern lyrical vernacular with Reed noting at one point, “You still got just what it takes to get me shook.” If you’re missing the gospel sound from My Way Home, it’s there on the smouldering guitar and organ melodies of torch song In The End (despite the secular lyrics) and closer Couldn’t Find A Way a self-affirmation anthem which rises to a grooving crescendo and features the backing singer talents of Memphis’s legendary Masqueraders. To get the best sense of Reed’s revitalised mojo though, check the highlight of an already very strong set in penultimate cut New Song, a blistering rnb stomper on which our man belts out how it feels to lay down a really good new tune while – well – belting out a really good new tune. Now that’s news you can use. Oh – and don’t forget, if you’re in the UK, catch Reed at London’s Dingwalls on 11 June 2019.
(Out now on Yep Roc Records)