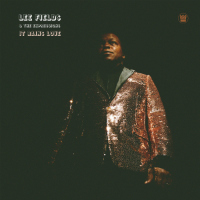 The success of the ongoing soul revival that began as the nineties ended and the noughties began gained much traction from the fact that a triumvirate of survivors from the golden era of funk and soul were hugely active within the scene. And while Sharon Jones and Charles Bradley may have sadly now have passed on, the man whose career launched theirs, Lee Fields, continues to grow from strength to strength with the release of latest album It Rains Love. Recorded, of course, with his current band The Expressions it has also once more been produced by the eminently capable hands of Big Crown Records head honcho, Leon Michels.

The LP, correctly, contains ten tracks (have a gander at Fields’ discography and you’ll see he’s a creature of habit – twenty LPs since 1979, fourteen since 1997 and of those fourteen, eleven contain ten tracks) of premium soul music in the classic mould. It is also a tribute to his wife of fifty years – a grateful Fields noting with wistful warmth, “It rains love when I’m with you,” over the rolling drums and buttery bass of the title track. As well he might since, without his wife, Fields’ singing career would have stalled sometime in the 80s. The much-sampled Fields doesn’t fail to provide yet more material for the great and good among hip-hop’s producers to salivate over but keep your ears especially peeled for the most-likely to be sampled cuts. One of these is Love Prisoner – a minimal funky stomp with a piano-underpinned opening that briefly nods to Still Dre and a tempo change to lilting torch song two thirds of the way through. Wake Up provides a distinctive echoey drum break. Also particularly worthy of note and most different to the rest of the LP are the slo-mo funky chunk of conga-tastic A Promise Is A Promise with the vocals experimentally heading in a psych direction as they do even more so on the dreamy trip of closer slowie Love Is The Answer with its smouldering organs and late night trumpets on which the lyrics mainly consist of Fields repeating over and over the title of the song – a fittingly simple summing up of the overall message of the album itself.
(Out now on Big Crown Records)