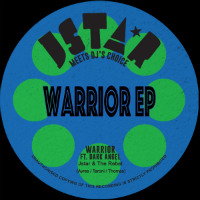 Well it had been a while since any proper bashment business had arrived on the monkey’s virtual doormat but you know how it is – nothing for ages and then two come at once. And so it is that JStar rocks up with news of a new 7″ EP entitled Warrior hot on the heels of the DJ’s Choice label’s debut release. And it’s not just a coincidence that JStar’s drop is called Warrior either for, strictly speaking, this release is entitled ‘JStar meets DJ’s Choice’ on which (in time-honoured fashion) JStar purloins Dark Angel’s growly dancehall vocal from the Rebel DJ’s Warrior cut and reboots it over his very own Boss Riddim. Then for good measure, you also get MC Jado from Shanghai (yes, really, Chinese dancehall!) over said Boss Riddim on a track entitled Champion Lover plus the Riddim Dub and Fleck’s dnb Riddim Remix instro. And that’s surely enough bashment vibes for anyone to handle at one go.
(Out now HERE)