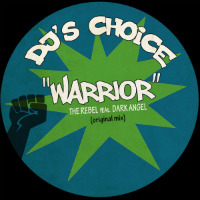 It’s been a while since the monkey’s had any proper bashment business to report but that particular drought is over now with the arrival of this new DJ’s Choice 45. Hitherto, DJ’s Choice has, of course, been the collective term for Rome’s ‘soul shakedown’ party-starter the Rebel DJ and Lisbon’s Dedy Dread. Now, however, it is also the name of the record label started by the Rebel DJ. The first release is this big-ass dancehall 7″ double header featuring a hypnotic beat from the Rebel and vocals from Dark Angel while the flip comes from no less an artist than DJ Vadim with vox from the legend that is Macka B. Not a bad score for a debut release, I think you’ll agree.
(Out May on DJ’s Choice)