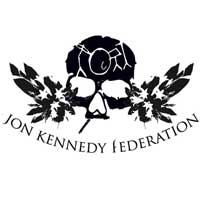 Very much a live Kennedy, dj/ producer Jon Kennedy has just set up a record label with initials not dissimilar to those of his dead president namesake – thus it is that JKF is the Jon Kennedy Federation. Although the former Grand Central and Tru Thoughts artist is behind the project, distribution will be handled by the mighty megacorp Sony. There’s no conspiracy here though – the plan is simply to disseminate good music around the globe in a benign musical ‘domino theory’ kind of manner. The process begins with the 3 artists signed so far: JK himself, and fellow breakstrumentalists Dopedemand and Covershocks whose Strengthen The Roses LP, Red Fox LP and Lifetimes EP respectively are all out now. The plan is to, “release one piece per month…of old, new, remixed, experimental, acoustic, hip hop, jazz, soul and electronic goodness for the foreseeable future,” so if you’re looking for a label – get submitting HERE and cop JKF stuff for cold cash money HERE. Also pick up a free DL of KRS Jon (JK’s alter ego) stoned breaksy-Hendrix groove 3rd Stone From The Sun from the first player below and check JK/ Dopedemand/ Covershocks LP/ EP samplers below that.