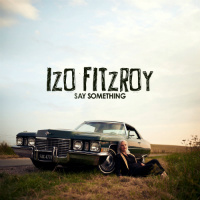 Right, new Izo FitzRoy single out – Say Something. No, not you, doofus! That’s the name of the single! Third track off last year’s Skyline album, you may remember – rolls along on a cracking drum break, decorated with a jazzy bit of piano while FitzRoy lambasts an unsupportive lover in her bluesy rasp? What could improve on that? Well, the singles package includes three remixes (two of which are house edits clearly aimed at the Kungs’ Kylie Auldist/ Cookin’ On 3 Burners crowd – but we’re not going there though) easily the finest of which is that from Berry Geordie himself. Yes, Smoove steps up with a fine piece of neo-disco – oops, my bad – nu-disco and positively nails things to a mast flying a flag saying ‘It’s all about the ARP.’
(Out now on Jalapeno Records)