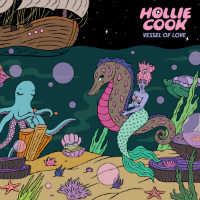 If a couple of fairly big factors have changed since Hollie Cook’s last LP, you can rest assured that the new one, entitled Vessel Of Love, is the most fully-realised manifestation of her distinctive brand of pop-oriented dub reggae yet. Which is all very positive news given that Cook has switched labels from Mr Bongo (her home for her self-titled debut and 2014’s Twice) to Merge, based in the U.S. Then there’s the other big deal of course which is that the production baton has passed on from Mike Pelanconi – producer for LPs one and two and no small influence on the Cook reggae sound as it has developed from dub-tinged rocksteady to a more polished but dub-heavy affair. Then again, the new producer is one Mr Martin Glover, a.k.a Killing Joke’s ‘Youth’ and possessor of a ridiculously impressive production CV including the likes of The Verve, Marilyn Manson, U2, Alien Sex Fiend and Beth Orton. This being the case, it goes without saying that Vessel Of Love evinces peerless sonic engineering. But what about the songs?

Well, the album opens with last summer’s single, Angel Fire providing immediate evidence that Cook’s signature style is in rude health. It’s a style incidentally that she once apparently described as ‘tropical pop’ – a term which has haunted reviews of her work ever since like the ghost of Amazulu. Not for our Hollie however the clatter of the 80s drum machine and the jaunty ‘Bontempi’-style keyboard trill of Anne-Marie Ruddock and co. Indeed, if anything, the synths at the start of Angel Fire are more likely to briefly recall Vangelis before the signature Cook combo of all-enveloping bass, butter-wouldn’t melt vocals and a sweet melody kick in. And as those familiar with her work will know – that is pretty much the Cook secret recipe right there. Arguably the synth-work is more prominent on this LP and perhaps that’s what makes it seem more polished and more overtly twenty-first century pop. After all, it’s not an instrument you immediately associate with one of Cook’s inspirations, Phyllis Dillon. They’re there again for a bar or two at the start of Survive (but then so is a bit of steel guitar), and bleeping and swirling all the way through the ethereal dub of Lunar Addiction. Tempting as it is to keep banging on about the pop though, this is also a super-heavy dub album and the various tropes you might associate with the genre – echo and ‘laser fire’ FX, pulsing seismic bass, minor key melodies and the skank are all there in spades on Turn It Around. Highlights include the aforementioned Angel Fire, the upbeat lilt of the title track, and the absolute standout – Freefalling. This is right up there with Milk And Honey as one of Cook’s best songs and juxtaposes the pop-iest of pop-reggae melodies with ribcage-penetrating bass in a gorgeous piece of breakup-themed lover’s rock. Vessel Of Love indeed! EU, UK and US tour dates below players.
(Out 26 January on Merge Records)