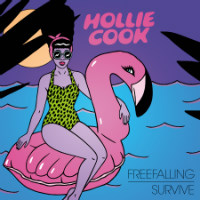 The honey-voiced Hollie Cook comes up smelling of roses yet again with a new double digi-single consisting of Survive and Freefalling which follows the July release of Angel Fire and, like that cut, will also appear on her forthcoming album Vessel Of Love released in January. Both the new tracks are again produced by Killing Joke’s Youth (as, indeed, is the whole album) and, of these, Survive is the ethereal reggae love song. The one things are really all about though is future classic Freefalling – a gorgeous slice of breakup-themed lover’s rock and perhaps the most beautiful song to have come the monkey’s way this year. If that’s not enough to make you dress in a leopard-print one piece ladies’ swimsuit and ride an inflatable pink flamingo, I don’t know what is. Absolutely crying out for a release on 45. Hint.
(Out now on Merge Records)