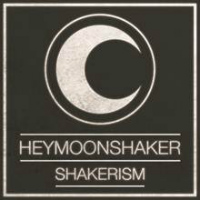 I don’t know. The pair of you head down to the crossroads to sell your soul to the devil and in return he gives one of you guitar skills and a raspy blues voice and makes the other one a highly proficient beatboxer. A beatboxer?!!
“Hey Lucifer!”
“Heymoonshaker – what’s good?”
“We’re supposed to be bluesmen – what’s all this Rahzel shit?”
“Relax! It’s what all the kids were doing in 1986.”
“But it’s 20 fucking 13!”
“…Say the ones working in a hundred year old genre. I’m trying to bring you on a bit! This is Youtube gold.” As indeed the nine million odd views of their London Part Two video (see below) where beatboxer, Dave Crowe, runs from dubstep to harmonica blues stomp, attest.

The forthcoming Shakerism is basically a nine track-deep beatbox blues bus of an EP which stops at the corner where The Black Keys busk with Beardyman. And it has the kind of crossover appeal that means, depending on the track, that their material is as likely to appear in dj sets (Cream F Feeling, video below), get played on rock radio (Ten Letter Word) or soundtrack the coffee table (Devil in Mind) – such are its popular sensibilities.

Look for Heymoonshaker’s meteoric rise to fame over the next twelve months as the EP is to be followed by at least one album before the duo’s souls are consigned to eternal hellfire. Catch them on tour – dates below player and videos…
Out 18 March

Posted on 15th February 2013 no comments