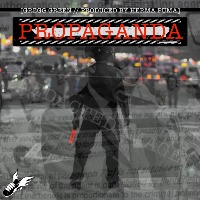 In Part 1 of today’s Herma Puma news we find the UK production outfit team up again with Brooklyn MC Gregg Green (following Green’s turn on The Bob Ross EP in 2016) for new single Propaganda. For this one, HP (essentially now just a one man show consisting of Pimpernel Jones), has created a 94 bpm boom-bap beat featuring excerpts of a wistful female vocal. Meanwhile, Green spends the best part of three minutes running through a history of the systemic mistreatment of Afro-Americans and explaining, yet again, why change is long overdue by tackling a range of sins from historic enslavement to insidious racist counter-narratives which these days seem to be barely modified by the insidious preface, “Of course, black lives matter BUT…” The track is available on a name your price deal (so it is possible to download for free and spread the message) but the proceeds will go to a range of organisations fighting for change.
(Out now HERE)