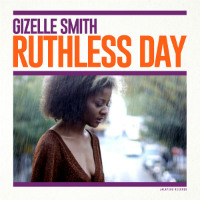 As the 30 March release date of Gizelle Smith’s Ruthless Day album draws near, she drops a new single, the duet Hero, as the ‘instant grat’ track if you pre-order said LP. But as anyone knows, a hero has got to be strong, he’s got to be fast, he’s got to be fresh from the fight – so who has she picked to join her on the mic? Step forward Eric Boss (a.k.a. E Da Boss) for another duet with Smith following his appearance on S.T.A.Y. Why they’re turning into a regular Marvin and Tammi double act aren’t they? Luckily, Hero is no 80s cheese-fest about waiting for the right jock to come along, more your sort of wistful seventies-type soul duet underpinned by a funky drums, moody organs and subdued horns about how lots of people want to be a hero but taking on the role can go badly wrong. Well – there are worse things in life. Getting home to find a mulleted Bonnie Tyler waiting for you while the world’s worst drum machine plays in the background, for example.
(Out now on Jalapeno Records)

Posted on 16th February 2018 no comments