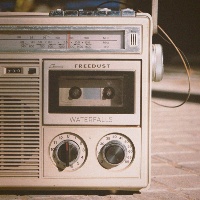 Freedust return with more of their retro-tinged breakbeat grooves on new four-track EP Waterfalls. The first half of the release is instrumental, opening with the uptempo jazzy breaks of Chilling In which scatters summery warmth as it goes. This is followed by the double-bass powered slinkiness of Dropping Needles, a track that comes on a bit like The Cure’s Lovecats might have if played by an instrumental sixties Soho mod-jazz band later remixed by Prince Paul. The second half of the EP is all about the title track though – initially in its vocal form and subsequently as an instrumental. Taking its cues from swinging sixties sounds it sashays along the knife edge between the underground and the mainstream with all the panache we’ve come to expect from this Italian outfit.
(Out now on Danca)

Posted on 14th November 2021 no comments