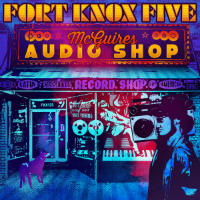 Inspired by a vintage sign they once picked up while out and about in a seedy back alley of Dupont Circle in Washington DC in the 90s (and which has graced their studio wall ever since), Fort Knox Five’s next single is McGuire’s Audio Shop. Less a full-on dancefloor bomb than an evocative mid-tempo head-nod, this funky instrumental strut is characterised by almost Mexican horn melodies and an ever-present wah-wah squelch intended to re-capture that ‘walking down the street grooving to your inner soundtrack’ spirit of the band’s now fifteen-year old single Brazilian Hipster. And it doesn’t do a bad job, though the buoyant optimism of the latter has been somewhat tempered into a more thoughtful guise.  Though that’s hardly surprising given the state of the world of late.
(Out 8 November on Fort Knox Recordings)