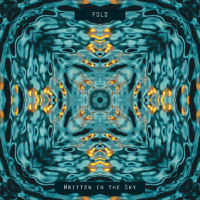 You’ll have heard of ‘conscious’ hip-hop of course, but while Leeds four-piece Fold might be influenced by this genre of music, that’s not what they are. Calling them conscious soul would be more accurate – though there’s a strong chance using such a term would net you a spell in ‘Pseud’s Corner’ should Private Eye get wind of it, not to mention a slap from everyone else within earshot. Still, that’s no reflection on the band who continue their ongoing mission to spread peace and love with forthcoming EP Written In The Sky which, like previous efforts takes its musical cues from both the seventies golden-era of American soul music as well as the heavier beats of 90s hip-hop and atmospheric breaks. Also, as with previous efforts, they continue to liberally (in all senses of the word) sprinkle their soundscapes with a range of vocal sources that are as likely to consist of sampled civil rights speeches, spoken word poets or even Bruce Lee (!) as they are with singers.

The first two tracks find the band augmenting ancient tracks by Bessie Jones (i.e. the person sampled by a certain Moby for proto-electro blues cut Honey back in the day) with their own instrumentation and then getting guest vocalist Daisy Martey (of Noonday Underground and sometime of Morcheeba) doubling up over the top. The second of these tracks also finds the voices of 40s African American prisoner Walter “Tangle Eye” Jackson, Black Panther Fred Hampton, playwright Lorraine Hansberry and poet Margaret Walker represented as well. Lest that be thought one spoken word sample too many, the last two tracks feature UK poet Mr Gee with a hook created from a Henry Jimpson Wallace sample again with Martey doubling up over the top. The overall effect is that of musical balm – something to apply to your ears whenever you’ve been inadvertently exposed to Trump or Farage flapping their jaws.
(Out 22 September on Fold FM)

Posted on 18th September 2017 no comments