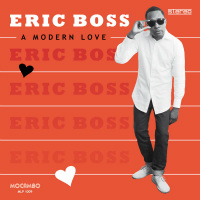 With all the musical projects Eric Boss, a.k.a. E Da Boss (a.k.a E of Myron & E and one half of The Pendletons) has been involved in over the past two decades or so, it comes as something of a surprise to reflect that Eric Cooke has somehow managed to avoid putting out a solo album until 2019. He has finally managed it however and A Modern Love finds our man exploring more or less the full spectrum of the musical tastes he has displayed across his multitude of musical projects over the years.

To open proceedings however there’s no messing around and Boss goes straight for the jugular with the stone classic, b-boy block-party funk of Closer To The Spirit – both the first cut from this set to be released as a single and the monkey’s favourite single of 2017. The track’s vibe is more uptempo but not dissimilar to that of Lyrics Born & The Poets Of Rhythm’s mighty (but now two decades-old!) collabo I Changed My Mind in marrying hip-hop production ‘chunk’ to the kind of music that originally inspired the likes particularly of Kool Herc. You might argue that the similarities between the work of Boss and Born don’t end there either, with both having indulged in hip-hop, funk, soul and boogie. Also, as it happens, Boss’s choice of emcee collaborator on I Wanna Ride (arguably this LP’s most hip-hop track) is one Gift Of Gab – a Quannum Project’s alumnus like Lyrics Born. The beat has the kind of sparse, space-funkiness, heft and lowish mid-tempo that, were you told this was a lost Chief Excel Production which E had been invited to grace with an earworm hook, you wouldn’t be at all surprised. Is It Love on the other hand very much recalls E’s retro-soul work with Myron and Timmion Records’ Soul Investigators while second single Bad Luck falls somewhere between, boasting rich horns and blaxploitation wah-wah but also a more minimal rock-solid rhythm approach on the verses while E channels an everyman lyrical wryness (“If it wasn’t for bad luck, I wouldn’t have no luck at all”) that’s as old as the blues. Also look out for organ-powered soul burner Don’t Give Your Heart Away, the eighties funk vibe of Gizelle Smith collab. Spiders, the reggae-tinged funk of Your Life Is Up To You, or the sweet curl-up-on-the-sofa soul of closing herbal tribute Merry Jane. Naturally E’s availed himself of a duo who know a bit about production too – in this case Björn and Steffen Wagner – the pair responsible for all the knob-twiddling behind The Mighty Mocambos and Bacao Rhythm & Steel Band so you know this thing is going to have punch. It might have taken E a while to drop A Modern Love but like the song says, you can’t hurry love and this LP is none the worse for the wait.
(Out now on Legere Recordings)