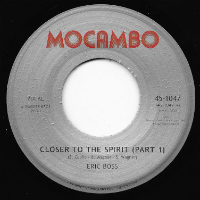 Eric Boss (a.k.a E from Stones Throw’s Myron & E) makes his bid for single of the year with stone-classic, b-boy funk 45 Closer To The Spirit and in doing so demonstrates the aptness of his name. Remember the tremors in the funk community and beyond when Mocambo dropped Bacao Rhythm & Steel Band’s P.I.M.P? Well – they’ve done it again. And if we learn one lesson from this, it is surely never to underestimate the power of a fat drum break and bass when coupled with a guitar chank on the first kick of the bar and a vocal performance that is the epitome of nonchalant cool. He even chucks a rap on the bridge and that’s effortless too. The bastard. Oh – did I mention that this 45’s flip is the instro? Or about the video? Kids getting their uprock on while E lounges in his vintage ride with a lady friend. Well, if you’ve got it, you might as well flaunt it. Sleep on the wax now and you will most definitely be paying later. It’s not possible to get closer to the spirit of Kool Herc’s first block party than this.
(Out now on Mocambo Records)