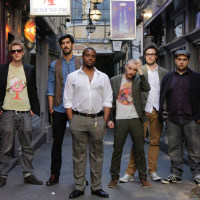 Fast rising seven-(or nine – depending on how you count it) piece funk-soul outfit and Jalapeno-signings, Ephemerals, have the likes of Charles Bradley and Lee Fields in their sights with their debut (yet, highly accomplished) first album Nothing Is Easy just out. Not that anyone should be surprised that their shit is so together since the personnel number some guy called Jimi Needles (that’ll be DJ Jimi Needles to you) as drummer and a Nicholas Hillman Mondegreen as songwriter and guitarist. Oh what? Him that was guitarist and songwriter for Hannah Williams & The Tastemakers formerly of Record Kicks and Sony? The very same. But what to ask them before the fame arrives and the weekend Guardian is all up in their grills? Why – a flippant ‘magnificent seven questions’ of course!

3. Correct. Global megacorps are the bane of our times! Wolf Valbrun (Ephemerals singer) in sheep’s clothing or a sheep in Wolf Valbrun’s clothing?
Good shout. I think the band are roughly voting for Wolf being dressed as a sheep, singing one of our serious songs just for extra irony. Perhaps in a parallel universe a bunch of sheep would enjoy being dressed as wolf though…

4. Indeed – though I understand older ones enjoy being dressed as lamb. Anyway – Hillman Imp or Hillman Mondegreen?
Austin fucking Allegro, or one of those old Citroens with deck chairs for seats. BOSSSSSS.

5. Classy. Now then Andre 3000 is soon to become a Hollywood star as a young Mr Hendrix but which would you prefer – a Jimi Needles biopic or Jimi Hendrix biopic?
Ann Widdecome’s biopic over Jimi Needles ROFLCOPTER.

6. Ah – I see you are LOL-lerbladers. But we digress – Southern soul or northern soul?
Middle eastern soul?

7. …currently being fought over by people with none! Very topical. Here’s the clincher – Monkeyboxing or monkey tennis?
Ah come on, monkeyboxing OF COURSE! MUCH LOVE, EPHEMS

Good answer gang! Ephemerals’ excellent debut album Nothing Is Easy is out now on Jalapeno Records! Free DL of vinyl exclusive cut Things Part 1&2 below and the LP snippets on the humble Juno player below: