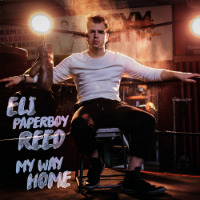 Headline news in the world of funk and soul is the imminent release of Eli ‘Paperboy’ Reed‘s new LP, My Way Home, on the Yep Roc label. It’s the fifth album from the Massachusetts native who earned his soul stripes long ago by spending a year in Clarksdale, Mississippi to absorb the sound of the south and then re-located again to Chicago to wind up playing organ and piano in the South Side church of gospel singer Mitty Collier. His first LP was released in 2005 and each successive release saw him move to progressively bigger labels from Division to Capitol and finally to Warner for his last LP, 2014’s Nights Like This. After which Warner dropped him. Are they kicking themselves now that Reed has created a raw eleven-tracker that takes inspiration from his gospel experiences? Let’s find out:

1. HOLD OUT:
What you should do when the man signs you up then drops you like it ain’t no thing. Create a raw uptempo funker that is all raucous vocals, snappy drums, flaming organ and garage-y guitar. Take that global music megacorps!

2. YOUR SINS WILL FIND YOU OUT
They certainly will Warner. This is what happens when you dump what’s good for you. You have to listen to a scorching gospel soul burner that’s not on your label.

3. CUT YA DOWN
Inspired cover of a gospel traditional – uptempo neck-snap funk drums, righteous guitar and searing organ. This one’s about damnation – coincidentally a milder form of the expletive uttered at Warner A&R when they heard it and remembered they’d dropped Reed.

4. MOVIN’
Movin’. Oh what? To a better home? Yes. Another thing you do when your label dumps you. As well as writing a haunting, downtempo organ-led cut.

5. TOMORROW’S PROMISED
It certainly is – and tomorrow is always a brighter day, right Eli? Hence the cheery ‘keep the faith and everything’ll work out fine’ vibe on this.

7. EYES ON YOU
Like a Creedence Clearwater Revival track recorded in the mid-sixties in a dusty little studio tucked away somewhere in Alabama’s back of beyond.

9. I’D RATHER BE ALONE
I don’t blame you Eli. All those Warner executives giving it large about targeting demographics and profits in the next quarter. It’s because they’ve sold their souls. Best write them something gorgeously bittersweet out of sympathy, yeah?

11. WHAT HAVE WE DONE
…said one Warner A&R man to the others. Reed drops a closing organ-led gospel slowie to really rub things in.

BEST TRACKS:
Hold Out – Cut Ya Down – Tomorrow’s Promised – My Way Home – The Strangest Thing – A Few More Days – What Have We Done