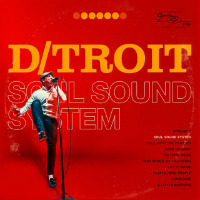 If you didn’t catch news of the 45 release of the title track of the Soul Sound System LP a fortnight ago (and even if you did) now is the time to properly say hello to D/Troit who make an assured full-length statement to mark D/enmark’s entrance to the global funk-soul scene. If you did catch news of the 45 release you’ll know that among the band’s credentials is the fact that Daptone’s Gabriel Roth has chief mixing credits. Of course if he’s on board, you know a band is doing something right which perhaps has something to do with the fact that their debut EP (which was what brought Roth on board) fully adhered to Roth’s own ‘shitty is pretty’ manifesto.

Soul Sound System‘s ten-track set balances seven funky burners against a trio of torch songs and satisfyingly pastiches the sound of the late sixties and early seventies in a way that a lot of so-called ‘deep funk’ bands think they do but actually don’t. Singer Toke Bo gives good rasp on James Brown-ish bumps like Do Your Thing but shows a variety of styles on the slowies. The rasp is again used on the latter-day Lee Fields-ish Lay It on Me, but things are sanded down for a smoother finish on Rock Me Baby and most effectively out of the three torch songs goes full falsetto for closer A Little Kindness. It’s not all vocal cuts though – opener D/Rumble is a heavy guitar-led jam featuring a Muhammed Ali sample. Highlights include the aformentioned Do Your Thing and A Little Kindness as well as the title track, the heavy soul of Roll With The Punches and funk storm Hurricane. Soul Sound System then – probably one you D/on’t want to miss out on.
(Out now on Crunchy Frog)

Posted on 24th September 2017 no comments