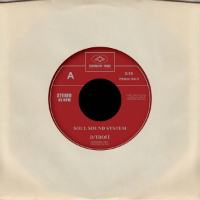 Craig Charles Funk & Soul Show regulars will probably already know that Denmark has entered the deep-soul fray in the shape of D/Troit so ears will prick up at the news that the band are shortly to release new single Soul Sound System on 7″ wax. It’s a funky, clattery soul-shakedown, heavy on the horns, mixed by none other than Daptone’s Gabe Roth (blimey!) and celebrates funk-soul culture. But how to represent the vibes emanating from the good groove in audio visual format? Perhaps suitably warm colour-filtered footage of people getting down in a bar (among them a pair of lovers) and quaffing the finest Danish brews. And since a single round in a Danish bar probably blew the entire video budget – we can only conclude that the music truly has spread the love and everyone involved put their hands up for D/Troit gratis. Video premiered below and the band play The Blues Kitchen in Shoreditch on 15th of September.
(Out now on Crunchy Frog Recordings)

Posted on 6th September 2017 no comments