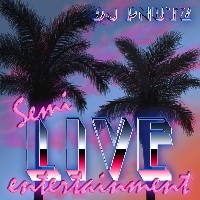 Now if the cover art was anything to go by, DJ Pnutz’ new album Semi-Live Entertainment would feature great sweeps of Jan Hammer-esque synth scores powered by simple drum patterns drenched in gated reverb for breakneck car chases along the neon-lit mean streets of 80s Miami. And while it is true that the seventeen cuts on this are programmed all-original, sample-free, midi-based funk work – Pnutz’ ear for her beloved b-boy and girl-friendly funky drum breaks ensures that while the spirit of Hammer is often present in a bit of 808-sounding drums here or synth-work or Latin cowbell percussion there, he’s a peripheral rather than driving force. Having said that, and while we’re on the topic of driving, SLE does provide an excellent soundtrack for cruising neon-lit mean streets anywhere – those in charge of sourcing soundtracks for the GTA franchise, take note. Also, the track titles are a different matter entirely and read like an actual list of Miami Vice episodes.

If you’ve been tracking the progress of Pnutz on MB since the monkey started featuring her releases all the way back in 2015, you’ll know she’s six LPs (at the last count) into her career and a past master at constructing the breakbeat-powered long player. This one kicks off with the heavily syncopated Hotter Than Hades which has ‘car-chase theme’ written all over it, like a few of the cuts on here, including the even more intense Catch A Killer. Another highlight is Alley Chant which has a heavier 80s influence melodically as well as a Middle Eastern one though once again the hip-hop drum pattern keeps it from being a period re-creation. The East is also a melodic influence on Best In Show and Travelling Back East though on these, the flutes take things way down the spice route into China – or, if we’re sticking with the Miami Vice analogy – at least to Chinatown. Again, it’s syncopated funky drums that prevent the Rhodes and synth keys-adorned Falling Deeper In Love from being straight 80s pastiche though if they had been accompanied by simple reverb-drenched kick snare drums, people of a certain age would definitely be getting ‘Crockett in love’ vibes – even more so on the moody and evocative It’s A Vibe. This latter is one of three cuts on here which you might believe was genuinely incidental music on Miami Vice back in the day, the second being the bitter sweet ‘pyrrhic victory end credit’-theme style synth reggae of Pink Seashells. The third is closer Winding Down the most Hammer-esque of all and – believe me when I say I am surprised as anyone that I’m going to write this – also the monkey’s favourite on the whole release. DJ Pnutz then, still expanding her stylistic boundaries and coming up trumps while doing it.
(Out 10 March HERE)