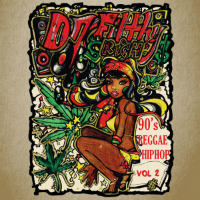 Since you can probably count the number of people who’ve had a mixtape featured on monkeyboxing on one hand, you know it’s something special when one does get featured. In this case, DJ Filthy Rich returns with new mix 90s Reggae Hip-hop Vol. 2 – the sequel (and every bit as good) to his excellent first installment from two years ago which has received over twenty thousand streams across all the platforms on which it has been featured. As with its predecessor, the new one showcases the Jamaican and Stateside meeting of musical minds that occurred two-plus decades ago when nineties reggae and dancehall niced-up nineties boom-bap hip-hop. It was a recipe so potent, it’s still a vibrant staple of the edit community today. Here however, Filthy Rich keeps it strickly nineties either by way of back-in-the-day material that united the two musical cultures on record (think Fu-Schnickens and the like) or special Filthy Rich custom blendage of nineties dancehall pellas and nineties hip-hop beats. Our man notes that the tape is a game of two halves nevertheless, the first fifty minutes reppin’ an uptempo early 90s vibe while the second fifty slows things down for the more stoned second half of the decade in question. Props also have to go out FR’s homie Masia One for the 90s reggae party poster-type cover art niceness too.