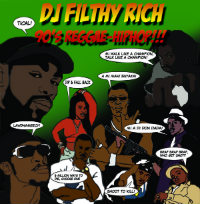 The posting of mixtapes on MB is a fairly rare occurrence due to the colossal amount of track, EP and LP submissions that the monkey receives on a daily basis but that’s not to say that every so often something won’t make it through the firewall due to its singular nature. Like DJ Filthy Rich‘s 90s Reggae Hip-hop Vol. 1. Interestingly, every 90s reggae hip-hop mixtape that the monkey has been sent has made it through this very firewall due to its inherent excellence though admittedly, prior to this, there have only been two – both in 2014 when DJs Bluntskull and Matt Nelkin submitted very different but equally scorching efforts and this is a worthy third one.

How many fans of reggae hip-hop mash-up kings Shepdog, JStar, Mr Benn, Maars and Cockney Nutjob knew there was so much original stuff from back in the day? But there was – as Filthy Rich explains – when big US labels started signing dancehall artists, they got big name hip-hop producers to do hip-hop remixes in order to break the domestic US market. The likes of Salaam Remi, Kenny Dope, Bobby Konders, Clark Kent, KRS-One, and Trackmasters all got behind the mixing desk with the originals and hit up rappers like Biggie, Method Man, OGC, Q-Tip, Yo-Yo, and the Geto Boys to supply guest bars. The recipe was so successful that before long the rappers were the ones hitting up the dancehall stars. Anyway – Filthy Rich has been busy throwing together whatever he can get his hands on as well as making his own blends with period material. Listen below – cop the DL HERE.