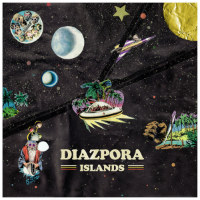 No band is an island, and German funk outfit Diazpora show they’re no exception to the rule with new LP – er – Islands which draws influences from all over the funk – ahem – diaspora. It’s the fifth album from the nine-piece Hamburg band whose number includes David ‘The Hauf’ Nesselhauf – fresh from his solo Afrokraut effort in October and has been analogue engineered by The Mighty Mocambos’ Sebastian Nagel.

Things are by turns blaxploitation-esque (opener Street Market), jazzy fusioneering (the title track) and afro-funky (Kinshasa Strut) and feature a number of convincing English vocal turns by Axel Feige. Highlights include the aforementioned crashing afro-breaks of Kinshasa Strut, the wah-wah-drenched strut of 27-28-29 (which features some nifty bass sax work) and perhaps best of all – the urgent funky lilt of Beast. It’s time to get your groove on.
(Out now on Legere Recordings)

Posted on 16th February 2017 no comments