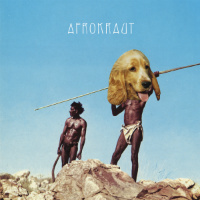 David Nesselhauf (or ‘the Hauf’ as the monkey likes to think of him) treads in the footsteps of Can with fourth album Afrokraut and its rich musical cultural mix of funk and afro-infused beats whilst simultaneously delivering a message about cultural unity. The LP is the fourth from Nesselhauf – a key figure in the German underground music and bass player for Hamburg funk collective Diazpora.

The thirteen-tracker boasts everything from dancefloor cuts (like opener Boat Mama which mingles ethereal washes of guitar with a skipping funk break, jaunty bass and vocal motifs), moody electronica (Bosso Fataka) and rockier stuff you could see DJ Shadow sampling (Wait For Me and The Routine) to jazzier fusion-ish cinematic beats (MS Utopia and A Route Obscure), Poets Of Rhythm-ish funk bumps like Dirt Track and more stuff such as Come Along Bintang Bolong where the kraut has been put in the afro. Or vice versa. The Hauf then – yes, he can.
(Out now on Legere Recordings)