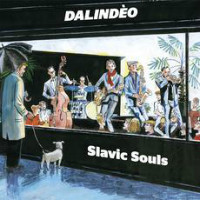 “What’s not to like about a melancholic party song?” says Dalindeo band leader Valtteri Laurell Pöyhönen of the Finnish band’s new LP described in the PR Blah as a “Surf-Jazz-Tango-Extravaganza.” Ah the Finns and their melacholy. A mate persuaded me to go to the cinema once to watch a Finnish film. I forget the name of the director and the film now but I do remember that the protagonist lost his job and his girlfriend and had the shit kicked out of him in the first five minutes and that that was pretty much his most positive experience in the entire film. It must be that long stretch of winter darkness. Mind you – then there’s all that midnight sun. It’s the kind of antithetical experience captured frequently on this LP.

Avalanche, for example, comes on like a cross between the Bond theme and the Star Trek theme (jingoistic licence to kill vs. the spread of galactic peace), the title track marries crisp and lively funky drums with doomy surf guitar (party vs darkness), Once Upon A Time In The North finds the common ground between easy listening vibes and western themes (Henry Mancini vs. Sergio Leone) and Tell Me feat. A-K Kaapola is a little bit barrel organ and a little bit opera – music partly made with bellows vs. music made partly by people bellowing. Like I said – antithetical. Not unpleasant though.
(Out 8 April on BBE)