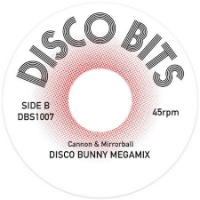 CANNON: Hey Bobby! Bobby! Where has he got to? Oh there you are – I see the Disco Bits label are getting stuck in for the new year with mysterious production outfit Cannon & Mirrorball who have just done a new disco biscuit 45 for them called At The Disco b/w the Discobunny Megamix!

MIRRORBALL (for it is he): You little liar! (Stretches braces emphatically)

CANNON: I am not! It’s true! At The Disco is a super-disco breakin’, seventies-style adventure that would have been equally at home in Manhattan’s clubs or Bronx block parties back in the day while the Discobunny Megamix tears through late 80s/ early 90s samples like an anthropomorphised cartoon rabbit pursued by a feral team of copyright lawyers.

MIRRORBALL (catching the sound of it on the ones and twos): Oo-err blimey! You’re right! Rock on Tommy! (Stretches braces till they slip off his thumbs and slap him on the nipples).
(Out 18 January on Disco Bits)

Posted on 9th January 2019 no comments