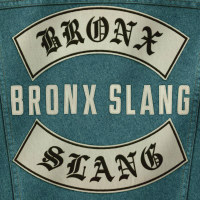 Hurrah! It’s finally time to get fully attuned to that ‘ol boogie down Bronx argot with the long-awaited, self-titled debut LP from Bronx Slang. The album, on the Fabyl label, follows a trio of dope singles characterised by classic hip-hop word-play between Jerry Beeks (previously known for solo work on Bad Magic, the label owned by The Wiseguys’ Theo Keating, back in the noughties) and nineties survivor Ollie Miggs of Shootyz Groove. Production meanwhile comes from fellow nineties survivor and big beat freak Jadell. Can this crew display the same chops on a full-length as they have done on the singles though? Let’s find out!

1. RUN AWAY SUCKER
Dubby bass, rolling drums, muted funk-rock guitars and Beeks noting that there are “Fishes swimmin’ in the Hudson next to missing women.” What better way to commence proceedings than with the grimy second single?

2. LADIES AND GENTLEMEN
The recent third single on which Beeks and Miggs chase down, ‘wack rappers’ armed with a combination of their own complex wordplay and a phat beat shot through with a jazzy swing.

4. WELL, WELL, WELL
The first single, and if you had Beeks’ lines or Miggs’ rhymes, you too might come up with something this dope. But if three of the first four cuts are the singles have they kept any powder dry for the rest of the album…?

5. KARATE MAN BRUISES ON THE INSIDE
…that’s a ‘yes’, then, as the tempo goes up slightly for battle rhyme time and a rout of the opposition…

6. FREEZE, MUSIC PLEASE
…followed by a booming Latin-inflected excoriation of twenty-first century America, with the political ante now getting upped…

7. MORE GRIEF
…and then raised again on this phat Barbara Acklin-sampling banger. Make that groove funky and you can hit ’em up with as much blistering social commentary as you like, “Blew the spot with the bombs, bursting in air/ In the land of the free, the slaves are still there.”

8. BRONX WAS BURNING
“Right or wrong it was all the same, in this evil rich man’s game,” – there’s no let-up as the ‘man’ finally gets his…

9. HIGH ALERT
…and then it’s straight for the jugular with Trump-baiting Middle-Eastern-samples and lyrics of fury about the kind of moronic systemic racism which means possessing olive skin can facilitate your being shot as an Islamic terrorist even if you’re not a terrorist or even Middle Eastern. Like, say, Ollie Miggs. Or Jean Charles de Menezes.

10.MARRIED TO THE GAME
Time for a brief but rumbling piano banger on which Bronx Slang pickpocket your playlist and show you how gritty hip-hop can get…

11.EXCUSE ME OFFICER
…and then’s it back to sticking it to the man with a rundown of all the Afro-Americans shot by trigger-happy policemen…

12.BLACK CAPTAIN AMERICA
…before one final world-weary but lyrical broadside at the man, “I hit the government with hard grammar/ because what’s the angle when they ain’t no spangle in the star banner?” Well quite.

COMMENTS: With western living standards falling and the worst kind of shallow-minded posturing political bigotry on the rise, perhaps the nihilistic, rundown Bronx of hip-hop’s seventies dawn – as referenced by the gang colours cover art of Bronx Slang – is a highly pertinent reference point. And if Bronx Slang expertly employ beats and a level of wordplay associated with the more hopeful but bygone era of the nineties, perhaps that’s because there’s a need to rapidly re-discover lost battle weapons to deal with the hate – chief among these being the sort of lyrical fire once the province of P.E. and KRS-1. But if the music and mic skills on this are a throwback, the lyrical content is both contemporary and vital, deftly and eruditely holding a mirror up to contemporary America and further afield and trumpeting a message to the man loud and clear, “Bronx Slang is in the room, hide away sucka!”