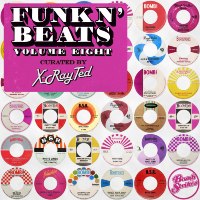 Given the way Covid laid waste to release schedules in 2020, it was perhaps no surprise that last year passed without a new entry in Bombstrikes’ long-running compilation series Funk N’ Beats. But fear not, for rising from the ashes of pandemic mayhem comes Funk N’ Beats Vol. 8 helmed by a new guest bombardier-in-chief, X-Ray Ted. Fresh from the success of his disco-breakin’ 45 Mirror Ballin’ from January, the Bristol-based, producer selects twenty-two cuts of funky breakbeat-based material including both sureshot sides of said 45 – the flip track being Party Time. Also present of his own crafting are cut n paste b-boy extravaganza, Tribute To The Original Artform and a half minute piece of intro hype, Are You Ready?

You are ready of course, but you might be a little surprised with the jazzy mellowness of Nautilus’ Fleur Earth-featuring cover of Root Down which forms the first track proper. The mellow continues with Aldo Vanucci’s remix of Mr Doris & D-Funk’s head-nod hip-hop bump All Down and then Alexander Norman’s Dynamite MC-featuring Flamingo – though by now the tempo has increased and it’s clear our ‘Ted was just easing you in gently, ensuring even the wallflowers were pumped and primed before the opening cartoon bars of Ugly Duckling feat. People Under The Stairs’ Shoot Your Shot drop. Thereafter, the dancefloor game is firmly on with a string of cuts consisting of Boca 45’s Sparky Evans, Flow Dynamics’ Straight From The Ground, Fort Knox Five and Flex Matthew’s Reach (one of the collection’s standouts), X-Ray Ted’s ‘Tedit’ of Bazza Ranks and Imagine This’s That Stuff and 2011 oldie Back & Forth featuring A Skillz and Izza Kizza. This section is followed by a trio of stylistic twists and turns first to the jazzy noodling of Nostalgia’s aptly-named Changes then to the heavy breakbeat material in the form of the Bully edit of The Fundamentals’ Thing and from thence to classic cut n paste hip-hop in another comp. standout – Double Dee & Steinski’s 2019 Afrika Bambataa remix, Jazz. In the final third of the set, Ali B and Nick Thayer’s pumping disco-breakbeat number NE Way is sandwiched between Ted’s own Mirror Ballin’ and Party Time and after that it’s all rather funky to the end where you’ll want to keep your ears open particularly for The Traffic’s massive cover of White Lines, Brownnout’s clattery afro-funk nugget, African Battle and The Allergies’ Jumping Off stand out.
(Out now on Bombstrikes)