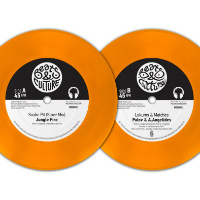 The second of two dope sevens from the new collaboration between the Beats & Culture Youtube channel and Melting Records is this – a 45 featuring L.A. outfit Jungle Fire on the one side and Athenian producer Palov and his guitar-toting homie A.Angelides on the flip. The former provides the spaghetti Western-tinged rootsy dub of Snake Pit (The Stove Mix) an appropriately hypnotic and
sinuous groove. Clearly not ones to stint on the good stuff, the latter yield the infectiously funky breaks of Lokums & Matches replete with Afro-Turkish style guitar – and all that on glorious retro-orange vinyl too. Get the 411 on the first 45 HERE and keep your ears pricked for Vol. 3 which, word on the street says, won’t be long in coming.
(Out now on Melting Records/ Beats & Culture)

Posted on 12th December 2018 no comments