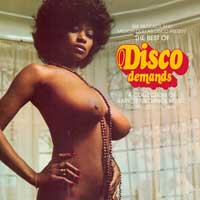 With The Best Of Disco Demands Al Kent looks to have put together a superbly comprehensive set of lesser-known disco gems. Now, although I largely regard disco as having treacherously slipped the knife between the ribs of funk and soul in the late seventies and (worse) laid the groundwork for house music, it is true that I do like the odd disco track. And you get no fewer than fifty-four on this mammoth compilation of compilations, including the likes of Cheryl Berdell, Jimmy Sabater, Chocolate City Connection and Brooklyn Express. Given that disco tracks were rarely the sort of thing that wrapped the action up inside three minutes, that gives you more than a few hours to recreate the spirit of an era when doing the ‘Hustle’, snorting umpteen lines of coke and have casual sex in public with several partners was not just expected but expected to be done in ridiculous clothing. Talking of clothing, I’m not even going to pretend that the main reason I posted about this was anything other than the cover artwork. An image of the legendary lady featured thereon nearly made the cover of the first monkeyboxing mixtape Filthy Rhythm, Dirty Soul and if I could have found an appropriate one, would feature on the next. Unfortunately, I couldn’t remember said pornstar’s name (possibly Barbara something), so if anyone knows perhaps they could let me know and save me spending arduous hours sifting through images of Mary Huff trying to locate her for just such a reason. Tune into the seventies via the video below for a retro taster of what is to come.
(Out 9 January 2012 on BBE)

Best of Disco Demands compiled by Al Kent from BBE Music on Vimeo.

(PRESS RELEASE)
The Disco Demands series started sometime in the early 2000s – I couldn’t give you an exact year because it didn’t feel like a big deal, so I never noted it. I simply wanted to put out a compilation of some records I really liked and maybe make a little of the money back I was spending on them. Buy some food and stuff. There’s always been Disco comps around of course but there was rarely anything that strayed too far from the standards.. the same songs kept appearing over and over again, or the comps would feature records you could pick up anywhere for little money. I’ve never seen the point in that. I gave up judging a record on its value or rarity a long time ago but surely there’s more to disco than Exodus, Martin Circus, Mass Production and all those Salsoul, West End and bloody Prelude records. So it was a nice surprise to find that there were other people out there who thought the same way. Volume 1 was pretty straightforward – just some nice records, with ! the only edit being an instrumental of Disco Socks; a strange, thinly veiled reference to the disco sucks movement. Then on Volume 2 I included a few of my edits and introduced the cover up concept to the disco world. That caused a bit of controversy, which of course I loved. And so it continued for five volumes.
What we have here then is the full series, give or take one or two cuts, all remastered, many re-re-edited, with lots of nice naked pictures to boot. For those who’ve asked since day one “will there be vinyl” I can finally say yes, you’re holding it!

All tracks edited by Al Kent except *(original studio version)

Posted on 5th December 2011 no comments