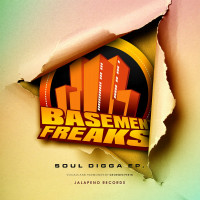 See, I said it would be all about the albums in the land of ghetto funk this year and here’s big player Basement Freaks gearing up for his. It’s like when Genghis Khan died and anyone with a claim to the throne raced back from rapine and pillaging in the far flung reaches of the empire of Mongolia to claim it. Except that Basement Freaks is racing back from djing and production in the far flung reaches of the empire of Moombah-olia and the nobody’s died. So not similar at all, really. Feel free to regard this as a taster of the LP to come though – for that’s apparently what it is. MC Rayna features on the fuzzy sludgefest that is opener Work It Out, we enter the swamp for A Blues Thang and finish with the Prince-like stylings of Gotta Make Me A Gun and That Little Thing You Do. Four for the earphones as well as the dance floor as it turns out – not as common as you might think.

Also, in order to promote the EP that’s promoting his album, he’s only gone and cannibalised Ye’s Gold Digger in a ghetto funk stylee. Well, I say ‘cannibalised’, pretty much all that remains is Ye’s exhortation to, “Get down girl, go ‘head get down” shamelessly looped over farty great fat-ass bass in a manner pretty much guaranteed to get shorty down. Cop it below.
(Out 12 November on Jalapeno Records)

Posted on 1st November 2012 no comments