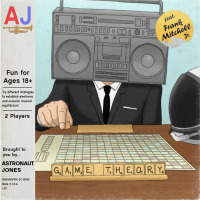 Astronaut Jones has decided that what the world needs is more in the way of ‘jazz fusion’-flavoured breaks and moreover that he’s the man to provide it. Gambling thus wildly with the public’s tastes, Jones initiates Game Theory with a ‘plugging into the amp’ sound and some groovy blaxploitation bass which promises a wondrous percussive drop. And said drop is indeed delivered but only after a Rhodes piano has entered like a chin-stroking jazzbo at a breakers convention. What to do? Well – you could employ Empresarios to knock out a different but generically related version or Omegaman to dub shit up. Whichever way you look though, be warned – it’s jazzy!
(Out today on Fort Knox Recordings)